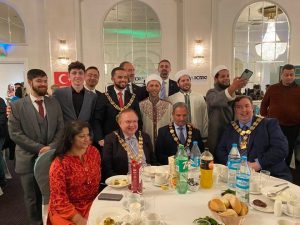 ICMG UK Regional President Ubeyde Bilaloğlu, spoke f his happiness of meeting again at an iftar program after two years after the pandemic saying: “We have largely left behind a difficult pandemic period that has affected our last two years. However, we have experienced and are still experiencing the sadness of not being able to enter this Ramadan in peace. Because, while reaching this Ramadan, the agenda of humanity is occupied by war and the troubles it causes. One of the biggest problems caused by war and internal conflicts is that people have to leave their homes and homes.

“Not only Africa, the Middle East, but also Ukraine, which is next to us in Europe, was included in this picture. We worry about the problems of these people. Our regional building project, which we started to carry out these works more effectively, also added excitement to us.”

“We will pray and strive for a world where war’s end and tears stop during Ramadan’s mercy season. May our prayers be accepted for all humanity, and may our peace be always.