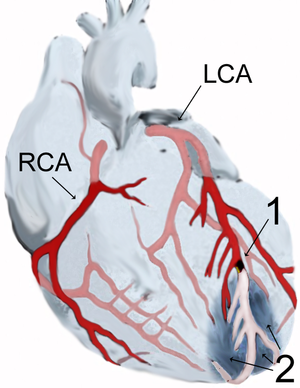 The heart is one of the few vital organs for life and its underlying anatomy and function is built to support its important role. The heart must perform consistently in health to fulfil its role and allow a normal human functioning.

The human heart is around the size of an adult fist and is located under the thorax, encaged within the ribs, posterior to the sternum and above the superior superficial of the diaphragm (Weinhaus and Roberts, 2005). The apex of the heart commonly lies at the left side of the mediastinum and spans from 6th to the 3rd intercostal cartilages (University of Liverpool, 2018). It  is slightly tilted so that the apex is on the left side and is surrounded with a pericardium comprised of two non-elastic layers and one serous layer which lubricates the heart so it can move within the pericardium(Shaw, 2018). The pericardium anchors the heart within the middle mediastinum (Jaworska-Wilczynska et al., 2016). The pericardium protects the heart and its blood vessels, and acts as a lubricant to reduce friction between the heart and nearby structures such as the lungs (Jaworska-Wilczynska et al., 2016).

The heart is made a of a single sheet twisted in a helical manor, often described as a Gordian knot, to form four distinct chambers (left ventricle, right ventricle, left atrium, right atrium)(Weinhaus and Roberts, 2005)(Torrent-Guasp et al., 2001). The heart walls consist of 3 layers: the outer epicardium, the middle myocardium, and the inner endocardium(Ikwuagwu, 2016). The thickest layer being the myocardium.

The thick myocardium is the muscle layer that allows the contraction of the heart(Ikwuagwu, 2016). The two atrial chambers act to pump blood to the ventricles. The two ventricular chambers act to pump blood to either the lungs (right ventricle) or the rest of the body (left ventricle). The main blood vessels that come in/out the heart are the aorta, pulmonary arteries/veins and the vena cava(Harvey, 2015). The vena cava is the largest vein and the aorta is the largest artery found in the body. The pulmonary vein is the only vein in the body that carries oxygenated blood and the pulmonary artery is the only artery that carries deoxygenated blood (Porres et al., 2013).

Between each chamber of the heart are valves. Attached to the tricuspid valves and mitral valves are fibrous strings referred to as “chordae tendineae” meaning tendinous cords which prevent the valves from flipping(Weinhaus and Roberts, 2005).  The aorta and the pulmonary vessels contain valves between the ventricle and the blood vessel (American Heart Association, 2004). These are called the pulmonary valves and aortic valves (Shaw, 2018). The aortic valve is between the left ventricle and the beginning of the aorta (American Heart Association, 2004). The pulmonary valve is between the right ventricle and pulmonary artery(American Heart Association, 2004). The opening and closing of the valves is what makes the well-known “lub dub” sound(University of Minnesota, 2017a). The initial “lub” is due to closing of the tricuspid and mitral valves after atrial systole; followed by the “dub” which is due to the closing of the aortic and pulmonary valves after ventricular systole(University of Minnesota, 2017a).

The function of the heart is to allow the circulation of oxygenated blood to the body and to allow oxygenation of deoxygenated blood in the lungs(Weinhaus and Roberts, 2005). The two divisions that form the circulatory system are the systemic division and the pulmonary division(Swan, 2008). The pulmonary division allows the oxygenation of blood in the lungs. The systemic division supplies oxygenated blood to cells around the body including all tissues and organs(Swan, 2008).

Blood flow of the circulatory system starts when deoxygenated blood drains into the right atrium from the inferior and superior vena cava(American Heart Association, 2004). The deoxygenated blood is pumped to the right ventricle during atrial systole(contraction of the right atrium) through the tricuspid valves(American Heart Association, 2004). The chordae tendineae prevents the cusps of the valves from flipping and ensures they are tightly shut to prevent backflow during ventricular systole(contraction of the ventricles) (Karas and Elkins, 1970).

Ventricular systole of the left ventricle pushes blood into the pulmonary artery and into the lungs(American Heart Association, 2004). Deoxygenated blood is oxygenated in the lungs via gaseous diffusion of carbon dioxide into the lungs and oxygen into the blood(BCcampus OpenEd, 2019). Diffusion is efficient due to tiny, one cell thick structure of blood vessels called alveolar capillaries and the equally thin alveolar wall (BCcampus OpenEd, 2019). The pulmonary vein drains oxygenated blood from the lungs into the left atrium which is pumped into the left ventricle through the mitral valve(also supported by chordae tendineae) during atrial systole(American Heart Association, 2004). Oxygenated blood drains into the left ventricle, and is pumped to the rest of the body via the aorta during ventricular systole (Karas and Elkins, 1970). This is the final step before deoxygenated blood arriving back to the right atrium through the vena cava, starting the cycle again. This cycle can be followed visually via the use of figure 1 seen above.

The left ventricle has thicker myocardium as it must apply significantly higher pressure during ventricular systole to push blood into the aorta and around the body (Weinhaus and Roberts, 2005). Whereas, the right ventricles do need to generate as much pressure as the blood is only pumped to the lungs which are located very close to the heart (Weinhaus and Roberts, 2005).

Conduction System of the Heart and Nerves

The heart beats in a rhythmic cycle from 60-100 beats per minute (British Heart Foundation, 2018), and its contractions are regulated by the electrical conduction system starting at the Sino-Atrial node(SAN) as seen on figure 2(Johns Hopkins Medicine, 2018). The SAN generates electrical impulses that causes the walls of atrium to contract, pushing blood into the ventricles (Johns Hopkins Medicine, 2018). The signal arrives at the Atrio-Ventricular node(AVN), which is considered to be a natural pacemaker as it delays the signal for about 0.09 seconds before relaying the electrical impulse (Klabund, 2008). The delay allows the atrium to finish systole and drain all its blood content into the ventricles before the ventricles contract. After the delay, the electrical signal is conducted through the AVN into the Bundle of His (Klabund, 2008; Rivera, 2014). The Bundle of His extends for around 3mm until it splits into bundle branches, and finally dividing into purkinje fibres which conduct the electrical impulses to the ventricular myocardium(Rivera, 2014; University of Minnesota, 2017b).

Electrical impulses result in contraction of muscles and must therefore be regulated. Depolarisation of the SAN triggers the depolarisation of the intrinsic conduction system of the heart resulting in contraction(Gordan, Gwathmey and Xie, 2015). The conduction must then repolarise to be able to depolarise for the following atrial/ventricular systole; ECG scans utilise this mechanism to form a PQRST wave that represents polarisation and depolarisation of the hearts intrinsic conduction system, which helps diagnose arrhythmia(Bendigo Health, 2009). Both atria must contract first allowing the ventricles to fill up, followed by simultaneous ventricular systole of the ventricles(Gordan, Gwathmey and Xie, 2015). Although the heart beats without any external nervous input, the speed in which the heart beats can be regulated by the autonomic nervous system which involves both the parasympathetic and the sympathetic nervous system(UC Davis Health, 2018). The sympathetic nervous system allows the heart rate to increase via triggering the secretion of hormones such as epinephrine(UC Davis Health, 2018). This sort of nervous action could be due to increased physical activity or a rush of emotions such as fear triggering the fight or flight response(Gordan, Gwathmey and Xie, 2015). The parasympathetic system reverses these changes and instead slows down the heart rate by releasing hormones that will counter the effects of epinephrine(UC Davis Health, 2018). Both parasympathetic and sympathetic nervous systems are controlled by the medulla oblongata.

The main nerve involved in the regulation of the heart rate in response to physical or emotional changes is the vagus nerve. The vagus nerve connects to the SAN and the AVN in the heart giving its parasympathetic effect on the heart, the sympathetic nervous system also similarly utilises ganglionic nerves to change the heart rate(Gordan, Gwathmey and Xie, 2015).

Atherosclerosis initiates with the build-up of low-density lipoproteins (LDL) in the tunica intima starting the chronic narrowing of the lumen. In patients with high cholesterol, there will be more LDL’s in the blood and hence LDL deposition in the tunica intima will be faster(Insull, 2009). Due to the detection of LDL’s in the arterial wall, the innate inflammatory system is triggered by the secretion of inflammatory chemicals such as chemokines from endothelial cells(Insull, 2009).

Inflammation allows mast cells, lymphocytes, monocytes and neutrophils to move into the cell wall(Insull, 2009). Once monocytes enter the site of damage, oxidised LDL(cholesterol) allow the monocyte to differentiate into macrophages(Insull, 2009). Macrophages digest and breakdown fatty deposits leading to the formation of foam cells(Valledor, Lloberas and Celada, 2010). The formation of foam cells increases rapidly and start forming plagues within the damaged region of the arterial wall(Singh et al., 2002). As the plaque grows and thickens in size, the arterial wall thickens and gets more rigid(Singh et al., 2002). Alongside with this, the smooth muscle cells start replicating and move to the surface of the plaque(Weitz, 1995). The movement of smooth muscle to the surface of the plaque promotes the formation of a fibrous cap. Over time, the fibrous cap can rapture, releasing plaques into the blood stream which could end up clogging an artery forming a blood clot(Weitz, 1995). Due to the lack of blood flow beyond the clogged part of the artery, neighbouring tissues and cells slowly start to die due to the lack of oxygen.

Atherosclerosis formation within the coronary arteries of the heart cause ischaemia and can lead to myocardial infarction(Pernow and Wang, 1997). Myocardial infarctions occur due to the lack of oxygen supply to the myocardium of the heart which leads to the death of cardiac cells(BHS, 2018b). Oxygen deprivation of cardiac muscles cause symptoms such as vomiting, anxiety, angina, coughing and feeling faint(BHS, 2018a). Anatomical differences that are caused by atherosclerosis is the hardening of arteries, narrowing of the lumen, and a waxy layer of fatty deposits found under the tunica intima of the arterial wall(BHS, 2018a). Atherosclerosis formation in the carotid arteries (blood vessels of the brain) can also lead  to a stroke(BHS, 2018b).

Conclusion
In conclusion, it is evident that the hearts role is fundamental in health and cannot be replaced with anything of equal complexity and function. The cardiovascular system extends to and plays a role in every aspect of the human anatomy and physiology. The heart reacts to not only internal changes, but also reacts to the environment and current psychology of the patients. Its significant complexity and integrity with the nervous system alongside with the brain, spinal cord, glands and other organs serves to prove the hearts vital role within the human body. Most importantly, the heart is capable of functioning independently thanks to its own intrinsic conduction system and pace making mechanism.

The U.S. is an Oligarchy